The Future of Us by Jay Asher and Carolyn Macker 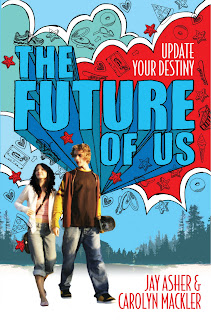 Title: The Future of Us
Authors: Jay Asher and Carolyn Macker
356 Pages

I saw this book in the library and I've got 13 Reasons Why by Jay Asher at home ready to read so I thought I'd pick this one up and see what it's like. Mostly, I enjoyed however I didn't find that I wanted to read a lot in one go but I'm not quite sure why. The plot was really good and clever and I loved the idea of it but I couldn't help but feel it could've been better.

The Future of Us is set in 1996, when the internet was just begging to become popular and Facebook wouldn't be invented for another 8 years. When Josh gets an AOL CD-ROM in the post he takes it straight to his next-door neighbor/best friend's house to put on her new computer. Emma then creates an email account and gets taken to a website called 'Facebook' that asks for her email and password. She enters them both and finds her Facebook page from 15 years in the future. She and Josh can see what not only their own lives will turn out like, but also the lives of their Facebook friends.

*SPOILERS* I have to admit, you could see Josh and Emma ending up together a mile off. I would have liked to read more about them at the end though, maybe a little epilogue of what their future actually turns out like or something. I found a lot of this book predictable, like the fact that once Josh finally manages to win over Sydney, he doesn't want to be with her and the same with Emma and Cody. *END OF SPOILERS*

I would recommend this book if you're looking for something with quite a unique story line to it, however be prepared to know what's going to happen next all the way through it. I'm not sure if it was the dual-narrator of Jay Asher and Carolyn Macker that made me not that interested in it but there was just something about it I wasn't quite sure on. Overall however I did think it was a good book, I just wouldn't re-read it.

Posted by LucyTregidon at 16:30