My mind has been completely on books (and results!) for the past week because I've been taking part in the Bout of Books 8.0 readathon over on my book blog abookandabrew. Because of this, I've only just realised that I haven't written my usual Sunday blog post over on this blog and I couldn't think of anything else to write about in such a sort space of time so I thought I'd give you a little overview of my week in reading! (to see my daily updates, head over to abookandabrew) 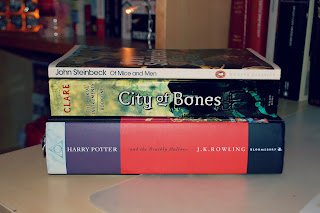 I started the week aiming to read 3 books; Harry Potter and the Deathly Hallows (which I had already started reading), City of Bones by Cassandra Clare and Of Mice and Men by John Steinbeck. This didn't really go to plan but I did still complete 3 books! Because I got my results back on Thursday and I'd done well (don't be fooled by how casually I threw that in, I was super proud and happy that my hard work paid off!) my parents decided to buy me something I'd wanted for a while: a kindle. Because of getting my kindle on Friday, I abandoned City of Bones for a bit and decided not to even start Of Mice and Men and read The Wonderful Wizard of Oz by L. Frank Baum and The Great Gatsby by F. Scott Fitzgerald (both of which are fantastic, I highly recommend them!)

I loved taking part in this readathon and it was really nice how it was laid back in the sense that, as they said on their blog, the only aim is to read more in that week than you would in a normal week (which I definitely achieved!). 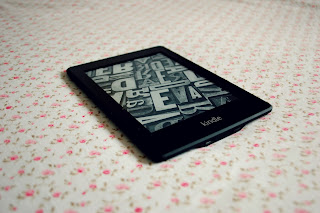 If you're a fellow book worm and would like to see reviews of any of the books I read this week (and hopefully a review of my Kindle too! It's the Paperwhite) make sure to keep an eye on abookandabrew as it's all coming very soon! (Just as soon as I get round to writing the posts...)

I hope you all had a really lovely week! Did any of you get results back this week too? How did you do? Also, if you have any ideas for blog posts you'd like to see from me make sure to let me know because I've run out of ideas at the moment so everything's welcome!

Lucy x
Posted by LucyTregidon at 23:45 No comments:

As I watched my news feed on every social media network imaginable fill up with A/AS Level students receiving their results this week it made me even more nervous than I already was to find out my GCSE results next week.

On Thursday, I'll head to the school I've spent 5 years at for the last time and pick up a piece of paper with some letters on it which define what I do for the next few years of my life. Although I'm aware a lot of people say that, in the long run, GCSEs don't really count for much and A-Levels are more important and many variations of similar things but that doesn't mean it's not important. If I don't get a certain number of grades I won't be able to go to sixth form where I want to or study what I want to study and that could potentially change a lot for me.

Up until now, I've never been in a situation where I've been so heavily dependent on a piece of writing on a page in any sense and although it is highly unlikely that I haven't got the grades I need to get into sixth form, even if I might not be able to study what I want, it's still very daunting. Also, as a someone who has been considered a 'good student' for my whole school 'career' and is expected by teachers and my fellow pupils to get mainly A's, I feel a massive amount of pressure to get those A's. People often argue with me and say at least the people around me have faith in me as a student but, in my opinion, that's got nothing to do with it. The hours and hours of work I put in were up to me. The many times I went back to various teachers outside of lesson time because I didn't understand something was up to me. Those grades are mine and mine alone and if everyone else is expecting you to get high grades, the pressure can be daunting.

Ultimately, I know no matter what happens on Thursday I put everything I could into those exams and I should be proud of myself but the little voice in my head reminding me of the possibility of failure won't stop just yet.

Are you picking up GCSE results this week or have you recently received your results? Let me know whether you got what you wanted or not and whether you had the same pressure as I did or not :)

Lucy x
Posted by LucyTregidon at 12:02 No comments:

Summer In The City Warm Up Tour (Cardiff)

On Wednesday this week (7th August) my friends and I headed into Cardiff for the Sitc Warm Up tour to see Tom Law, Dodie Clarke (doddleoddle), Dave Giles and Bethan Leadley (musicalsbethan), and let me tell you, it was fantastic. 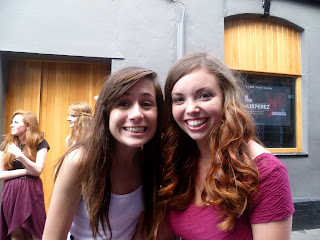 Soon after we arrived at the venue (around 4pm with the gig scheduled to start at 7.30pm) Dave came outside to say hello and Tom and Dodie arrived at the venue (with a quick comment about how we were earlier than them) and went to leave their instruments inside before coming straight back out for a chat. The 3 of them stayed outside chatting to us (there were already quite a few people in the queue, maybe around 20...ish...) and taking photos for a while before going back in to get ready for the gig. The reason I wanted to mention this is because, to me, that is what YouTube gatherings used to be like and I wish they were still like that now. A small group of people got the chance to meet people whose videos they like and also make friends with other viewers. It was so lovely to get to spend time with Tom, Dodie and Dave like that and I can't really imagine a similar situation where you would get that chance these days because everything's grown so much (take sitc for example!). I know that the majority of gatherings are still just a group of people meeting up in a field somewhere but even then it can be difficult to talk to content creators because there's often a lot of people there. I'm not trying to say that bigger events like vidcon and sitc are bad, I think they're a fantastic chance to get to see a lot of content creators you like in one event but I definitely understand why people say they miss how gatherings used to be. 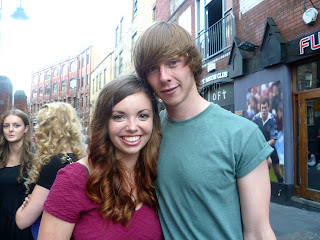 The gig itself was fantastic. I've watched Tom, Dodie and Bethan's videos for a long time now and Dave is honestly one of my favourite musicians at the moment and I've been listening to his music constantly since Upload 2 (and I'm STILL loving it despite listening to each song hundreds of times). Clwb Ifor Bach is such a lovely, intimate venue and we ended up sat on the floor for most of the gig just enjoying the music. As a fan of acoustic music, I loved having the chance to listen to them all play in that kind of environment and at the end of the gig they turned all the electric equipment off and played a song each with just them and their instrument while we all sang along (still sat on the floor). 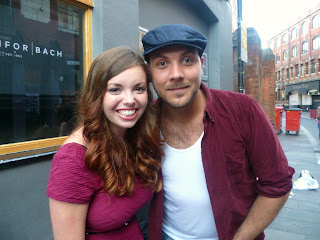 They had a meet and greet afterwards but because I managed to get photos with them all before the gig I just took photos of my friends with them (who didn't manage to get photos before), bought an EP off Tom (which is fantastic, I've already listened to it loads) and went to have a photo with Bethan (Bethan didn't come outside before but she did say in the gig that she's ill so I assumed that was why she didn't. She was as lovely as the others in the meet and greet! I did have a photo with her but it didn't turn out great). I also mentioned quickly to Dave how much I appreciated him taking the time to comment on my YouTube video and he said that it was no problem, it was a good video and one of his favourites from Upload which made my night! 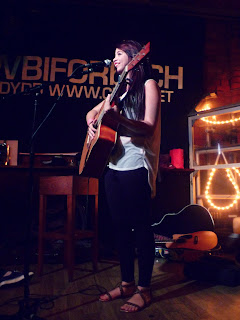 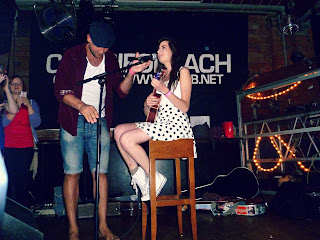 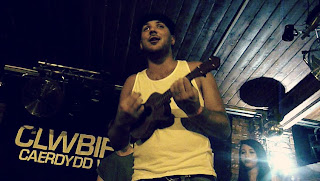 Overall, it was a really fantastic gig and they were all
so nice! I really enjoyed getting to spend time with them before and if you get the chance to see any of them live I'd definitely go. Also, if you haven't heard of them before please do check out their YouTube channels because they're all fantastic musicians :)

Lucy x
Posted by LucyTregidon at 00:00 No comments:

My Blog and I

Hello beautiful person who is reading this and welcome to my blog.

This week I was sort of stuck for ideas of what to blog about and it struck me that this blog doesn't really have any format to it and I thought I'd just ask if that bothers you? Would you prefer it if it did have a format or schedule?

Also, I have no idea how many people read this on a regular basis so I would really love it if you could just leave me a little comment down below letting me know whether you like my blog or not and why. It would really help me improve my blog which is something I'm keen to do.

I really want to get my blog to the best that it can possibly be but to do that I feel like I need feedback from the people who read it because I don't want to post content you're not interested in! I will always blog about things I feel passionately about or my thoughts or feelings at the time but I also want my blog to be a place you enjoy spending time and I want you to enjoy reading my ramblings as much as possible!

Like I said, I'd really love to hear from you if you've taken the time to read this, even if it's the first time you've ever come across my blog! I'd love to hear what I can do to make you stay!

Lucy x
Posted by LucyTregidon at 00:53 No comments: