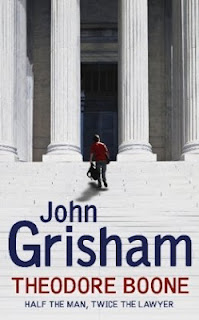 I picked this book up at the library, more because I couldn't really find anything else I wanted to read and I thought I may as well give a different kind of book a go but I didn't really enjoy it. It was well written but wasn't particularly gripping and I didn't feel like I wanted to read it all the time like I usually feel with books.

Theodore Boone comes from a family where both of his parents are lawyers, and he plans to follow in their footsteps. At only 13, Theodore already has his future planned out, although he often changes his mind about whether to be a judge or a lawyer. The novel follows Theo as he finds himself in the middle of the biggest murder trial his town has seen for decades with a vital piece of evidence that could be the difference between someone getting convicted and someone walking free.

*SPOILERS* I found the fact that Theo's friends go to him for legal advice and the fact he knows the solution to anything they ask him ever so slightly unrealistic. I understand that this is his character and it doesn't necessarily need to be believable because at the end of the day it is a work of fiction but I felt that the rest of the novel was written in a naturalistic way, other than this aspect of his character. *END OF SPOILERS*

Overall I thought the book was well written although I probably wouldn't recommend it to someone who enjoys similar books to me. I almost feel like it was a waste of time me reading it when I could've been reading something else. The only real reason I gave it a 3/5 is because the writing style was good.

Posted by LucyTregidon at 00:25