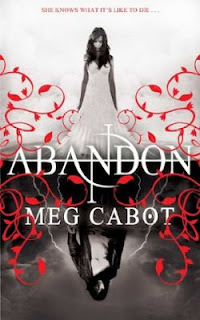 I've never read one of Meg Cabot's books but I've heard a lot about them. I know she wrote The Princess Diaries and I love the films that were made from those books and people seem to think good things of her writing so when I went to the library looking for a book to read and saw Abandon, I figured I may as well read it.

Abandon is the story of a girl names Pierce who dies, but comes back to life. The novel takes place a year after her death and describes how she managed to escape death and the consequences that came from it. She is now a different person to the one she was before she died and ends up moving with her Mother back to the Island where her Mother grew up due to her bad behavior leading to her being kicked out of her school. When Pierce died, it was John who allowed her to return to the world as she knows it and the book also follows the relationship between Pierce and John and how he causes trouble for her by trying to save her on more than one occasion.

Overall I have to say I was really disappointed in it. I found that I had to persuade myself to keep reading quite a few times throughout the book and if it was any longer I don't think I would've finished it. I found that nothing really happened and it seemed to all be the back story, leading up to the events that I assumed would come at the end of the book, but it seemed to just end without much actually happening. It was all her thinking over the events of the last year or so of her life that lead to her being where she is now but then as soon as it began to come into the present a lot, the book ended.

*SPOILERS* I found that the whole relationship with Pierce and John was really difficult to understand. One minute she hated him and the next she loved him but there was no real definition between when she hated him and when she loved him, it just depended on the mood she was in at the time. If there had been a reason for her constantly changing her mind about him (other than the fact she thinks he's bad for her) I wouldn't have minded so much. Also, the bit with her best friend Hannah committing suicide seemed to have been thrown in out of the blue. Hannah was not mentioned before then so it was difficult to believe that she was really her best friend before 'the accident'. One thing that really annoyed me was how at the beginning of the book, she keeps talking about the 'accident' but doesn't tell you what happened for about 4 chapters. I found this frustrating and although it is meant to keep the reader in suspense, I just found it annoying. *END OF SPOILERS*

I would probably read one of Meg Cabot's books again but only because I have heard good things about her, based entirely on this book alone I wouldn't. I won't be reading the next one in the trilogy because I didn't find the plot all that captivating, even though I think it could have been. I wouldn't recommend this book, especially if, like me, it would be the first Meg Cabot book that you have read.
Posted by LucyTregidon at 23:13