An issue I've always felt rather passionate about is weight. There's no particular reason I'm so passionate about it, I just am. It seems that in the last few weeks it's one that's been brought up in a few different ways in different environments from YouTube, to TV, to friends talking about it and I wanted to share my opinion on the topic.

Although I know the topic of weight is a very sensitive issue and I need to be careful about how I say what I plan to say, that doesn't mean I'm going to be any less honest than I would be if I were writing about something that's not controversial at all. I do want to say before I fully get into it though that this is all my opinion, although it's what I think is right (naturally; it's my opinion) if you think differently that's perfectly okay.

I have never been the kind of girl who is naturally 'thin' but I have also never been 'fat'. Although when I was younger (until I was about 11 I think) I was a little bigger than all of my friends it never really particularly bothered me and as I grew everything seemed to sort of balance out (not that I've grown all that much since I was about 12!). I'm what I like to call happily in the middle. I'm not thin, but I am far from fat and, most importantly, I'm happy with myself.

I will happily admit, sometimes it's difficult to say you're happy with the way you look, I'm sure that's the same for most people if not everyone. Everyone has days where they think they look fat or their hair won't go right or whatever it might be just doesn't look good. That's okay. That's normal. Having days when you're not feeling completely confident is fine but the main thing is being able to move on from it the following day. Your hair doesn't look right? Put it up that day and hope it sorts itself out tomorrow! If you have these days a lot (like I do, especially if I'm tired) the only thing I can suggest is really try to ignore it, as difficult as that may be. I've found that if you're having a bad hair day or you didn't have time to do your makeup that morning and you feel like you look like a zombie, walking into school (or work/college/whatever it might be) with a genuine smile on your face means no one notices. It's hard to believe but it's true. If you're being happy, positive and friendly people won't notice if your hair's a bit frizzy or under your eyes is a bit darker than it normally is.
I'm a big believer in confidence being very important. I realise that's easy for me to say as it's something I've never particularly struggled with but having the confidence to say 'although I'd like to be a little thinner sometimes, I'm healthy and that's the most important thing'. As well as it being okay to have bad days, it's also okay to have things about yourself you maybe don't like all that much. My main tip for that is learn what style clothes suit you most and use it to your advantage. If you feel like the clothes you are wearing fit you nicely you'll feel more confident in them which will help you be happy and positive on those bad hair days!

Another quick little note I'd like to add, for those of you not in the UK or who aren't watching 'I'm A Celebrity...Get Me Out Of Here!' there was a conversation a while ago between Amy (a model/beauty pageant contestant) and Rebecca Addllington (Olympic swimmer) and Rebecca commented on how she gets tweets almost every day from people saying she's fat or commenting on her appearance. To me, that is totally ridiculous. I don't understand how people could call an athlete fat and I personally think that Rebecca is an amazing role model for girls as she proves that you can be beautiful even though you're not a size 6 or smaller. 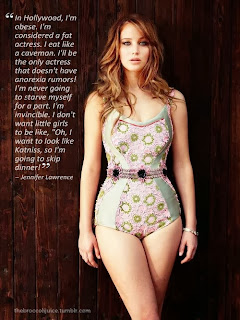 It really upsets me that so many girls feel like they need to be a certain shape in order to be beautiful. It also upsets me that posts like these and videos like the ones I've linked here even exist because it means that although people are trying to make it less of an issue, it's not working. Carrie Hope Fletcher summed up how I feel about the 'weight issue' pretty well in her video 'Happy and Healthy' and I really suggest you watch it, it's nice to have someone in the public eye who is a healthy role model. Also, I'd just like to quickly mention that Jennifer Lawrence is another amazing role model. She feels strongly about the issue too and isn't afraid of talking about it publicly.

So that's my opinion on the topic. I'd love it if you could share what you think with me in the comments and I hope you check out the videos I've linked if it's a topic you're interested in or feel passionate about.
Lucy x

Posted by LucyTregidon at 00:20 No comments: