For the past week or so I've been painfully close to 100 subscribers on my YouTube channel and just when I'd told myself to stop obsessively refreshing the page and just patiently wait for an email, the email came. 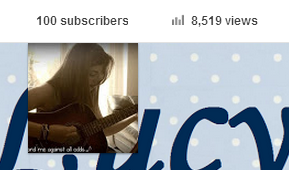 It is utterly mind-blowing to me that there are 100 people out there in the world who care about my music enough to want a reminder every time I share something new. I started my YouTube channel in January 2012, after being inspired by the likes of Tyler Ward, Boyce Avenue and Savannah Outen, because I'd been writing songs for a while but had kept them to myself and not played them to anyone. I'd also been working on becoming a better singer (and musician in general) and I wanted a way for me personally to track my progress. I never really thought anyone outside my closest friends and family would want to listen to it but here we are, nearly 2 years later with 100 people wanting to listen. I'm aware that to many people 100 subscribers isn't very much (especially when compared to the 'bigger youtubers', many of who have reached 1 million) but to me it is definitely a lot.

In the time since I started my YouTube channel a lot has changed. My musical style has evolved and I'm much closer to finding the type of musician I want to be, although I'm still not quite there. I've had the chance to have feedback from some musicians I really admire and I've even got a few of my friends considering setting up their own YouTube channels because they've seen me do it. The fact that I could have even slightly inspired someone else to follow their dream, even if only a tiny portion of it has been from me, makes me so happy. In September I started at a new school and with that came a massive change in environment. I've left a school where it was considered a 'weird' thing to post videos online of myself singing and I was told to give up because nothing would ever happen from it to an environment where they encourage it. My friends at my new school have all subscribed to my channel (something not many from my old school did), tell me often that they like my music and ask about gigs and are trying to come to as many as possible. This change in environment is amazing and I feel so lucky to be in such a positive, encouraging place surrounded by such supportive and lovely people.

Along with the excitement of reaching 100 subscribers, I also bought a new ukulele yesterday! I've been saving up to get a new one for a while and as I'm starting to get into playing live gigs a lot more than I ever have before now it made sense to get an electric-acoustic one so I don't have to rely on the venue's having enough mics. I went to a lovely music shop in Cardiff (G. M. Music) with 2 very specific ones in mind (both Ibanez) and surprisingly, chose almost straight away when I saw them (this is surprising because when I was buying my guitar about a year and a half ago we were in the shop for an hour and a half with me playing 2 different ones trying to decide. I'm not a very decisive person to say the least). 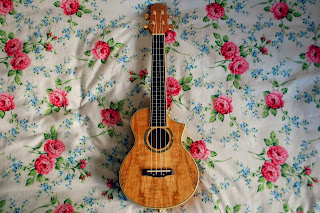 Lastly, I'm playing a lot more gigs! Although they're all very local it's still progress and although I've played live for a number of years at competitions and such it's very exciting to be asked to play more than one song, especially as it all sort of happened by accident. A friend of mine was helping organise a fundraiser for his rugby team and asked if I'd play and since then I've been asked to play another 3 in the lead up to Christmas. Along with the subscriber milestone, the fact people in my town are starting to talk about me is very exciting because it feels like what I've been working hard at for a few years is starting to pay off. When I was younger I was never much of a singer but it was something I had my heart set on and with hard work (and constant practice!) I feel like I've come a long way. I still have an even longer way to go but looking back on my old videos does make me realise that the hard work is definitely starting to pay off.

All in all, my life seems to be getting crazier by the day! With starting my A-Levels came a work load like I've never known and then adding all of the music things on top of that everything seems a little hectic, but I have to say, as tiring and chaotic as it sometimes seems, I'm loving every minute of it.

Lucy x
Posted by LucyTregidon at 12:18 No comments: