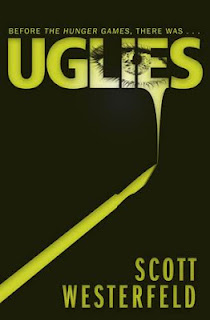 I thought this book was great, however it didn't really live up to the expectations I had of it. From what I've seen online everyone loved this book and I have to say I don't really get why. It's a fantastic book, don't get me wrong, and the story line is really original and the writing is good but there's just something about it that meant it took me ages to read. Usually books in this sort of genre I love and read in a few days but this one I read on and off for nearly 3 months because I just couldn't get into it.

Uglies is the story of a girl named Tally Youngblood who lives in a world where when you turn 16 you have an operation to turn you pretty. When you go from being an Ugly to being a Pretty you also move over to New Pretty Town and 'your only job is to have a really great time.' Tally makes a new friend Shay just before she turns Pretty and Shay doesn't want to become a Pretty so decides to run away. The authorities then offer Tally the choice of finding Shay and turning her in or never becoming Pretty at all. The novel follows Tally's journey of trying to find Shay and her discovering things about the city that no one else knows.

It sounds pretty much like the plot of any dystopian book so I'm not really sure why I didn't enjoy it much. I guess it was because I've recently read things like The Hunger Games and Divergent so I have high standards for dystopian books and this one just didn't seem as good. I stuck with it because I was determined to finish it to see what all the rave reviews I read were all about and I found that just over half-way through it did become a lot more interesting and fast-paced but until then I found it dragged a little.

*SPOILERS* I found that once Tally had actually got to the smoke it was a lot better and then got better again when she got closer to David and his parents told her more about the operation. I thought the end of the book was great as well with Tally and David having to go back to the city and rescue the others from the Specials and I think I might read the next book, more than anything just to see where Scott Westerfeld went with the story line from there. *END OF SPOILERS*

If you've read this book and are one of the people that think it was really good I've love to hear your opinion of why it's so fantastic because to me, it was just average. Not bad at all, but just not amazing either. Also, let me know if you think it's worth it to read the other books in the series or not. :)
Posted by LucyTregidon at 18:56